Future of Farming Talkshow was a big hit

On the 14th of October, an overly crowded talkshow in Pakhuis de Zwijger, over 130 people joined to listen and to young agri & food professionals from all over the world. Hosted by Ikenna Azuike, the young farmers spoke about the future of farming.

The evening was kicked off by a pressing message from Ikenna himself: ‘It’s insane that we don’t celebrate farmers and farming more, when you look at everything they do for us! Did you know 70% of the food produced world-wide is produced by small-scale farmers?’ The importance and topic of the night was introduced.

Policymaker
During an intense 15 minutes in which you could hear the grass grow, Melle Leenstra, who works at the Dutch ministry of Foreign Affairs, introduced the audience to a new framework when thinking of food production in Africa and Asia. ‘We have to go beyond talking about small-scale farmers. We have to talk about entrepreneurship,’ or as he called it on twitter later that night: agripreneurship. ‘When we talk about small-scale agriculture, the frame we use when we talk of Africa or Asia is as left-behind countries. That is why we have to talk about agricultural entrepreneurship.’ And especially now that the climate change is happening more and more, feeding the world becomes an increasingly large problem. So how can we feed the world population? ‘We need to make clear that agriculture is a worthwhile profession to pursue. We have to turn expertise into knowledge, and exchange it with each other. And we need cooperatives to get more youth into agriculture. They might have a bad reputation, but they should be about working together for profitability, input provision, service provision, and marketing.’

Young farmers
Then three young farmers introduced themselves. Raju from Nepal, Carol from Kenya and Marije Klever (young Friesland Campina and dairy farmer) from The Netherlands. All three of them dairy farmers, but in totally different situations. ‘I became a dairy farmers because I needed money to buy diapers for my baby,’ Carol tells us. ‘I have five cows, and it takes me all day to take care of them, and my boy. I would love to have more technologies around, to make life easier.’ Marije, who has a hundred cows: ‘I work for approximately the same time, since I also have to milk the cows twice a day. And although the technologies do make it faster, they also are a danger to my freedom of farming. I’m bound to a lot of contracts of the people who take care of the machines I work with. I’d rather have less machinery and more people, but I simply cannot afford that. Staying independent is very important to me.’

Raju, who owns 53 cows, tells about his parents who owned three cows. ‘We had a very small farm  but marginal farmers like that do not earn money. So I studied and I graduated, and took some of my father’s money and saved some myself, and started the dairy farm.  I do not know what I would do otherwise. But it is hard sometimes, it’s really challenging to convince others of the lifestyle. My friends want to talk about politics and economics, not about cows,’ he says. ‘I do want to grow my farm, because my land is enough for a hundred cows.’ Raju explained that he doesn’t have to take into account the CO2 emissions from his cows: ‘I’m not bound by law to have a maximum of cows per square meter, unlike Marije. Sustainability is not something Nepal cares about a lot, or least, it is not reaching me as a farmer.’

Panel discussion
Joris Lohman, from Slow Food , shared his thoughts. ‘Listening to the farmers, I don’t feel like speaking anymore. They need to speak, not me, I’m not a producer,’ he started. ‘This is exactly the main reason we organized an event in Milan during the World Expo, where we invited 1000 farmers from 120 countries. Feeding the planet and food security might be the biggest challenge humanity is to face. And the people that actually produce our food in the future deserve our attention. Farmers need a bigger stage and more pride. To be given more pride, but also to have more pride in their own work.’ Joris give his compliments to Agriterra: ‘I really like the way Agriterra views agriculture: as an opportunity for business. We as Western countries first we brought food, and now we bring knowledge and technology. That’s a major positive change. There’s still a lot of harm being done by trying to convince people to work in a way, but I do think cooperatives is a very interesting framework to think in.’

Next up is young Dutch farmer Iris Bouwers, board member the NAJK (Dutch agricultural youth network) which has 8000 members. ‘But the number is stable, we are not growing. Probably because there are less and less young farmers. Many children don’t know if they can take over the farm. In Marijes’ case her parents even told her not to do so. It’s a very insecure way of life, so people avoid it.’ When an audience member asks her if she thinks about sustainability her answer is clear: ‘yes, of course we want work sustainable. We are the young farmers that will feed the future, and we want to farm in forty years as well. That is why we need and want to be sustainable, and want to change!’

Jorrit Kiewik, the director of the Youth Food Movement, is especially fond of his perception that people are eager to learn from each other. ‘That is so powerful!’ As a farmers’ son who works and lives in Amsterdam, he stresses the importance of the older generation making place for the younger ones.

Agriterra
Cees van Rij from Agriterra expresses his joy at how many people turned up for the event. ‘In the end, it’s not just the farmers’ responsibility, but all of ours as farmerfans. Scientists, policymakers, shop owners and consumers; we all have to take responsibility.’

Quiz time
The evening was kicked off by a quiz featuring seemingly easy questions. Are you curious whether you can answer them? What is the most popular fruit in the world? Banana or orange? Who produces the most rice? Vietnam or China? How many percentage of the chocolate coming from Africa is processed in Africa? (for the answers, see below). Although there were a two people who made it to the end, most of the food-knowing salon was disappointed and surprised at how fast they dropped out of the race. The quiz made clear that there is still a lot to learn, and facts to know.

Bananas are more popular than oranges. China produces more rice. Only 1 per cent of the chocolate coming from Africa, is also processed in Africa. 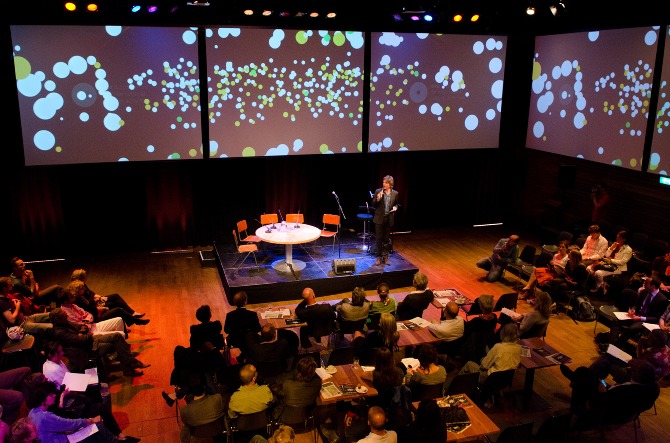