The real story about doing business in Indonesia

Each month, we’ll feature a Business Advisor of a different country to show how you can benefit from working with Agriterra. Richard van der Maden is our Business Advisor for the month of December! This week, he gives some helpful tips on the difficulties and opportunities of doing business with Indonesian companies.

“Agriterra sets up business deals between between Dutch food companies and Indonesian farmer cooperatives. We do not only coach the farmer cooperatives, but also guide Dutch businesses on how to conduct business and build relationships in Indonesia. We have a fulltime presence and large network in Indonesia and are intimately familiar with the cultural norms of the country. 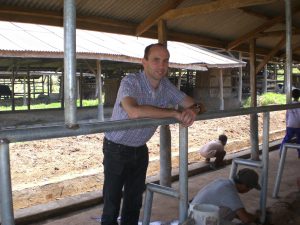 Doing business in Indonesia has become a lot easier in the last years. There have been many positive improvements in infrastructure and healthcare since the new president was elected in 2014. There is also a lot of interest in Indonesian society and government to do business with the European Union and the Netherlands specifically. The current Indonesian president, Joko Widodo, calls the Netherlands ‘our oldest European ally’ and is eager to strengthen our bonds. Indonesia is especially interested in our knowledge and experience of harbours, water management and horticulture.  Recently Dutch prime minister Mark Rutte also conducted a trade mission to Indonesia.

But what many Dutch businesses find is that these trips and introductions are not easy to evolve into successful business relationships. Because even though Indonesia wants to do business with other countries they also create many hurdles and rules which make doing business harder. For Instance, Friesland Campina is allowed to have a milk processing facility, but half of the milk products has to come from Indonesia. They are also quite protective of their own labour market and are occupied with investigating who exactly is doing business in their country and whether Indonesia can directly profit from it. You have to ‘compensate’ every Dutch expat that you employ in Indonesia with a certain number of local Indonesian employees. Its almost a little bit protectionist.”

“Another important aspect of doing business in Indonesia is that everything is built on relationships. You have to be on the ground, face to face, talking to people. E-mailing, skyping or paper agreements hold less sway here. Many people will only do business with you if they know you personally. It is really quite hard to get people to ‘move’ from a distance. That is the big advantage of doing business with Agriterra. We have a local presence with Indonesian Business Advisors. As such, we can play an important intermediary role. 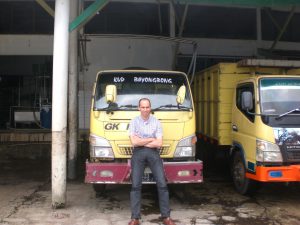 A more concrete tip on doing business in Indonesia is that an Indonesian business partner will never say ‘no’ to your face. This is considered quite impolite. When you present a plan and they say: “it looks good, we’ll try to implement it”, they are they are actually saying: “we think it is a bad idea”. So you have to figure out when your partners are actually saying ‘yes’ or ‘no’. The worst thing you could do in Indonesia is lose face. You should never criticize someone in public, especially not someone who is considered higher in rank than you. Dutch directness is not really appreciated.”

“There are many interesting commodities which can be sourced from Indonesia. Cocoa and coffee are great examples; Indonesia produces great quality coffee. Especially the Arabica coffee from the highlands of Sumatra is considered very good. Dutch coffee roasters were ecstatic about the coffee bean samples we imported from our farmer cooperative partners. The challenge for us is to help create a continuous supply with the same quality. What is interesting about the coffee trade is that a lot of the taste of the final product is decided by the roasters themselves in the roasting process. In order to make the coffee farmers in Indonesia conscious of quality and taste we organize our own coffee tastings. We take some green bean samples of different quality and roast them. When the farmers taste this coffee they can experience exactly what happens with the taste if they, for instance, don’t dry the coffee beans properly. It gives them insight into the quality necessary for international trading.

Agriterra is also quite active in improving the dairy sector in West and East Java. But fresh dairy is of course a difficult commodity for international trading. The Indonesian market also doesn’t yet produce enough dairy for own consumption. But, we’re expanding our dairy network and trainings to dairy farmers, so we’re continuously investigating other international dairy trading opportunities. Get in touch with me to find out how you can source these, or other commodities from Indonesia for your food business!”

Earlier, Richard introduced himself and the work of Agriterra in Indonesia. He also explained how setting up a business deal with a farmer cooperative actually works.